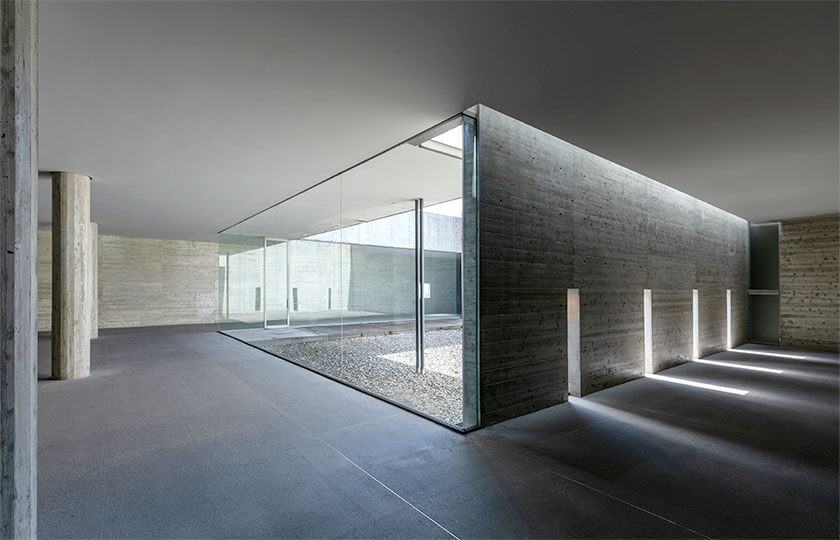 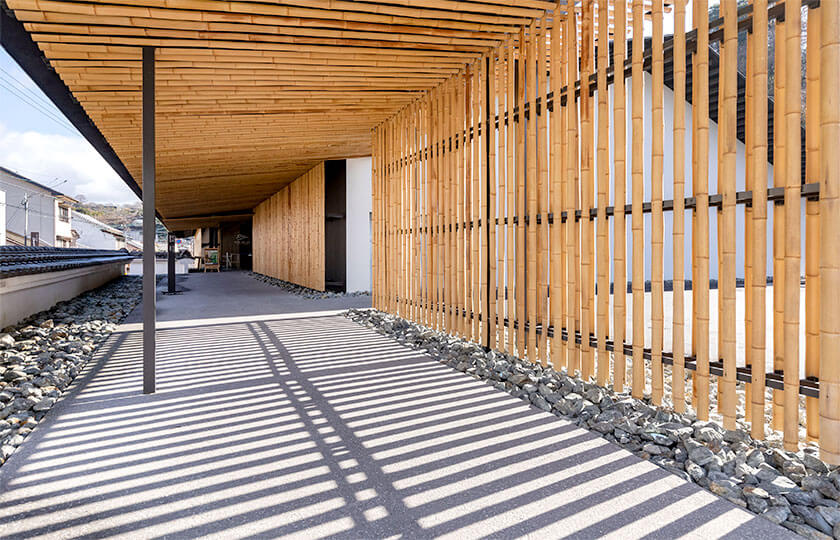 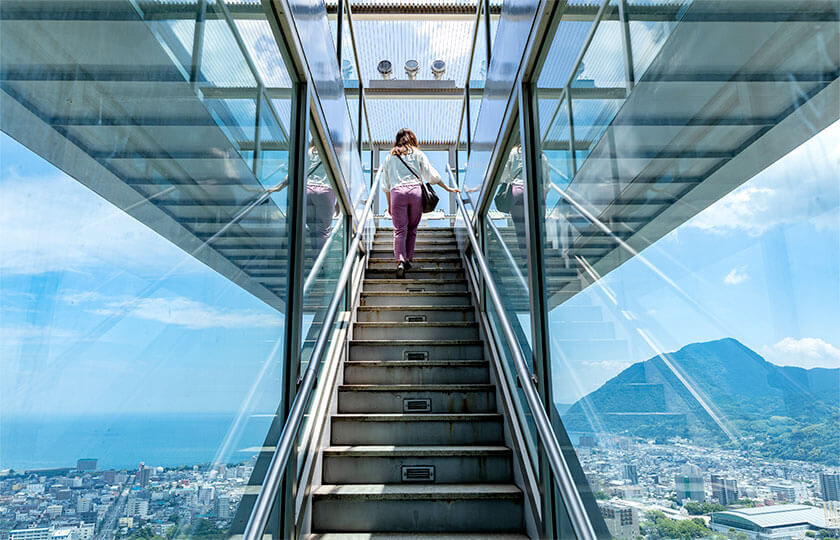 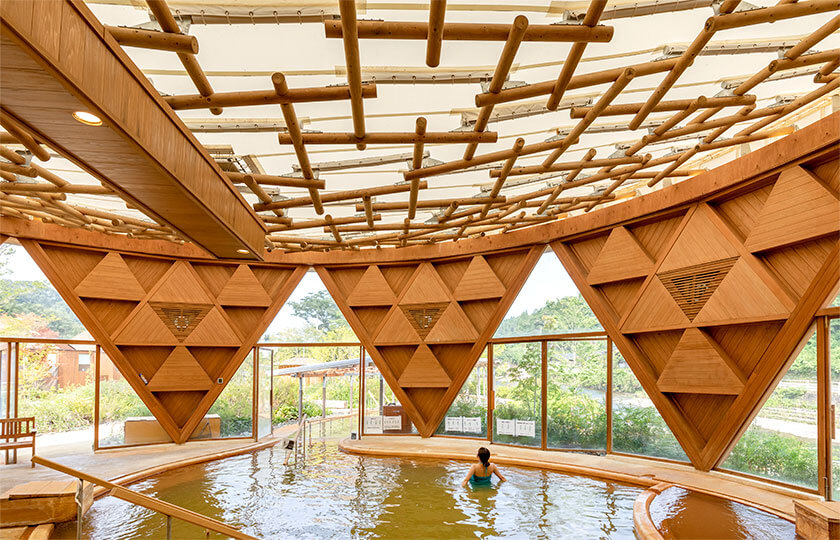 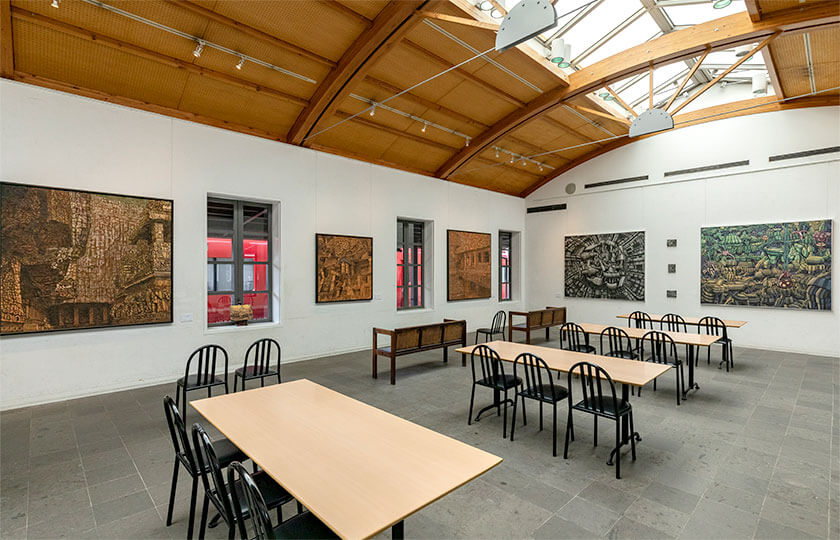 Oita Prefecture is like an "architecture museum." There are many buildings scattered throughout Oita prefecture that was built by Japan's world-famous architects, including Kingo Tatsuno (1854-1919), who is known as the "father of modern architecture in Japan," and Arata Isozaki (1931-), a world-famous architect who was born in Oita prefecture. The architecture of Oita Prefecture continues to be loved by many people as a symbol of the city, attracting tourists from all over the world.
What is the appeal of these architectural works?Experience an artistic space where light, shadow, wind, and sound are woven together.

Shigeru Ban being interviewed at Oita Prefectural Art Museum (OPAM), which he designed. 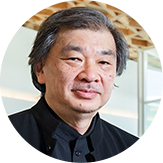 Architect / born 1957 in Tokyo
Shigeru Ban studied at the Southern California Institute of Architecture (SCI-ARC, Los Angeles) from 1978 to 1980. He went to Cooper Union School of Architecture in New York from 1980 to 1982. He then worked at Isozaki Arata Atelier from 1982 to 1983, following which he graduated from Cooper Union School of Architecture in 1984. He established Shigeru Ban Architects in 1985. He consulted for the United Nations High Commissioner for Refugees (UNHCR) from 1995 to 1999, and at the same time established the NGO Voluntary Architects’ Network (VAN, currently an NPO).

Oita is like a museum of famous architects.
It is a home to buildings that have long been loved by the local residents.

From Kingo Tatsuno, an architect famous for designing Tokyo Station, to Kisho Kurokawa, who designed museums in and outside of Japan...
It is no exaggeration to say that Oita is a museum of architecture in and of itself, with its many buildings scattered throughout the prefecture designed by Japan's famous architects. There is a particularly large number of works by Arata Isozaki from Oita that are loved by local residents. Shigeru Ban, a world-famous architect, was attracted by Isozaki's works, visiting Oita often while he was a student and later designing many buildings, including the Oita Prefectural Art Museum. We asked Mr. Ban about the power of architectural works.

I understand that Oita is the prefecture with the largest number of buildings designed by you. What was your first impression of Oita?

Actually, when I visited Oita during my school years, I only came to see Arata Isozaki’s works, and I don’t remember anything about the city. Mr. Isozaki was given so many opportunities just because he was from Oita, and there are buildings he designed remaining in the city. I think that having good buildings is a treasure for the city.

You say that you wanted to use architecture to address issues and problems facing the city. What issues did you notice when you came to Oita prior to the Oita Prefectural Art Museum (OPAM) project?

The planned site for the museum was along an important main street. I think there are types of structures matching the street. I felt the exterior of OPAM should be the face of the town, and its façade should link to other structures standing on the street. I did not want to create a unique structure, but rather one that blends into its surroundings and is open to the public. 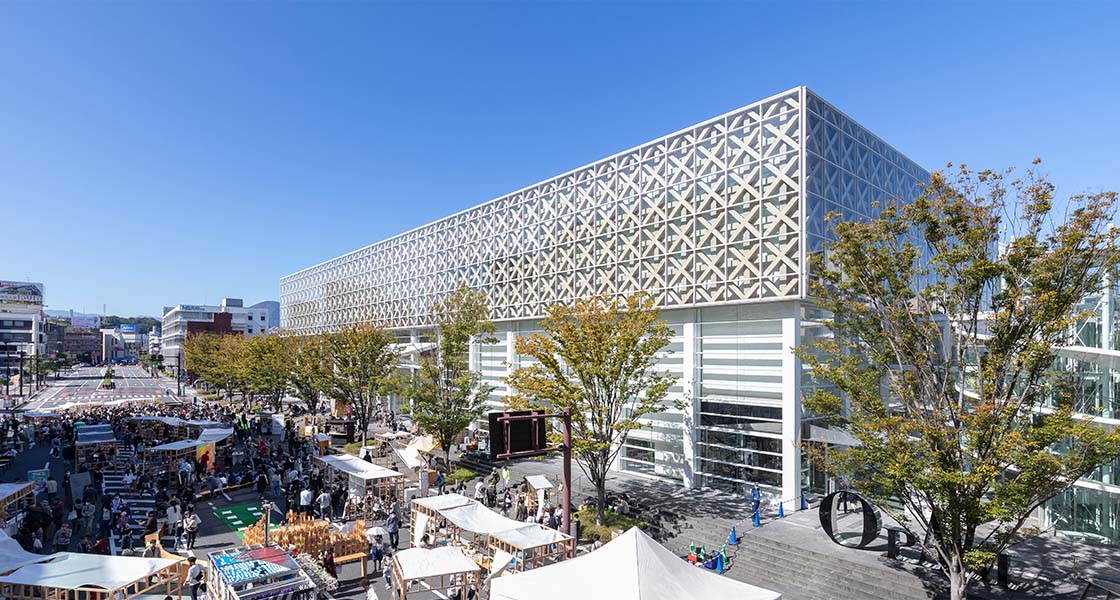 The impressive exterior of OPAM uses Oita lumber suitable to be the face of the city.

What do you mean by open place?

A museum is called a “black box” or a “white cube.” You don’t know what’s inside until you enter. Sometimes people may feel hesitant about going inside. That’s why I wanted to create a space that is open like the front porch of a house where people can come in from all directions.

What made you think that museums were not open?

I go to different regional cities, and when I see a theater or museum, I ask a taxi driver who made it, and the driver answers with the name of the construction company. No one is interested in who designed it. Then I ask if the driver has been inside the music hall or the museum, and the driver tells me that he has driven passengers to the place but has never been inside himself. I wanted public buildings to be places that the general public visits with ease of mind, and I designed OPAM hoping to make it so. 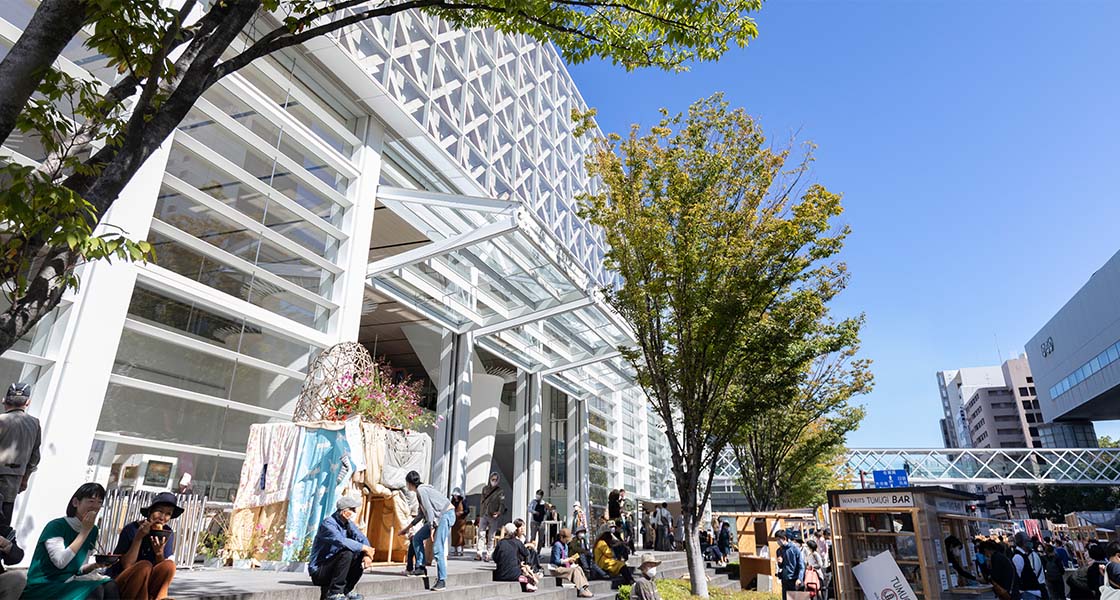 When the operable horizontal bi-folding glass door on the first floor is open, OPAM becomes a semi-outdoor public space.

That must be the reason why there is a horizontal bi-folding glass door. What issues did you address in YUFUiNFO, the Yufu City Tourist Information Center?

Today, there are many tourists coming from within and outside of Japan—more than at the time Mr. Isozaki worked on the station building. It had become difficult to accommodate a waiting room, information counter, and other functions in that station building. The concept was to make it a place where travelers could spend time and get sightseeing information.

What are the special features of the building?

This building also opens up to the town. The building is glass on all sides, making it expansive.

Just as you can see trains stopping at station platforms from the inside the building, I wanted to make it so that you could see the building without getting off the train. From the second floor, there is a panoramic view of Mt. Yufudake, the symbol of Yufu City. It is a design that is only possible at that location. 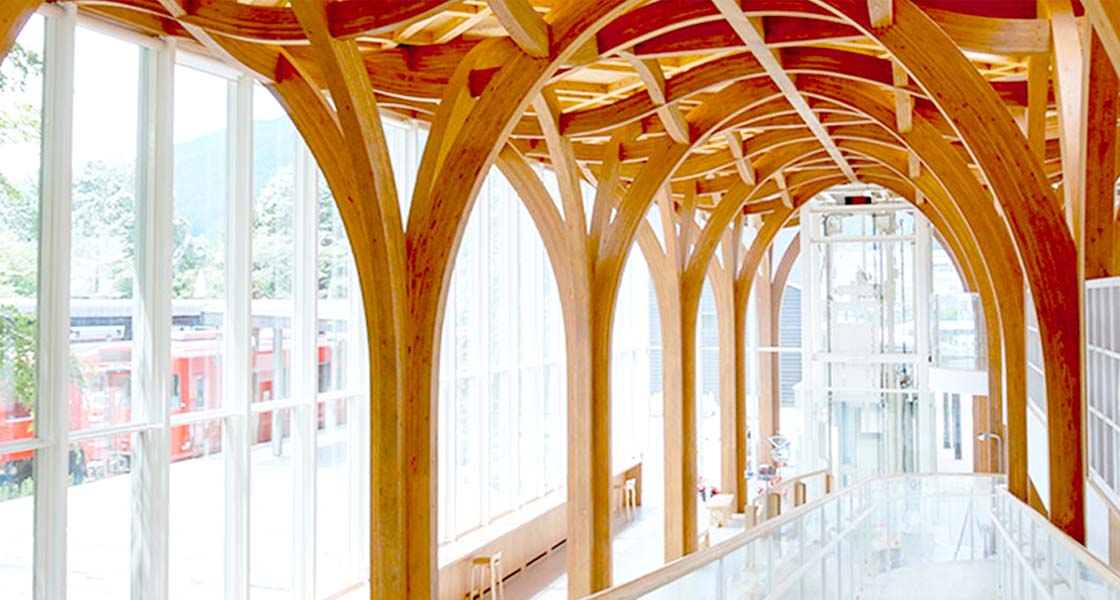 How about Kur Park Nagayu?

Arukiyu, a walking onsen, was needed for the main hot spring bath. The facility was located along the river with a wonderful view, so I designed a semi-outdoor walking onsen at which visitors could improve their health by walking in the hot spring while enjoying scenery that changes from season to season. There’s different scenery with each visit, so visitors will not get tired of it. By the way, I asked my designer friend to make a bathing suit for the walking onsen, one that would not cling to the body even when it gets wet.

The onsen facility’s entrance is quite large and impressive. Does this also have to do with its being open to town and residents?

This entrance was used for the opening ceremony. I created this vast entrance so that events could be held for residents. 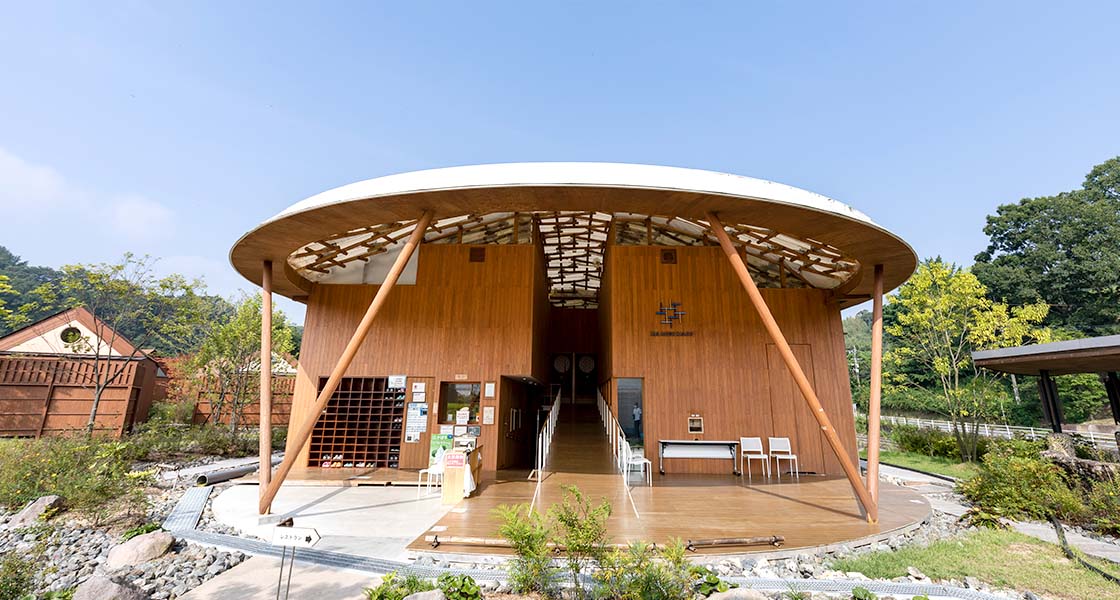 Tell us your ideas for the lodging cottage.

We wanted guests to come with their families for an extended stay, so we made a mezzanine where children could climb up the ladder to sleep. The bathroom has windows on two sides, so guests get a semi-outdoor, open-air bath feeling when they are open. The beds and table are foldable, so the space can be used as the guests wish.

Mr. Ban’s paper tubing was used for beds and tables in the room. OPAM and YUFUiNFO also had paper tubing interiors. Do you do interior designing, too?

Yes. The exterior and the interior are linked in architecture, so I think architecture is complete only when the interior is finished. I did not just make paper tubing chairs and tables in OPAM. The bench is also my design. I made it with Shichitoui (short-leaved Malacca galingale), material used to make tatami mats, which are a well-known product from Kunisaki City.

So you used material from Oita.

Yes. I used Oita-produced cedar and stone from Saiki City as exterior and floor material. I always try to use local material.

What type of construction do you feel is the most comfortable?

Of course, the one I created (laugh). I begin to wonder about many points in structures that are made by other people.

Then, what do you think is necessary to make a pleasant structure?

I think it’s light and wind. There are light and shade moving during the day. And the wind going through the structure. There is a continuation from inside and outside. When I go to Europe, for example, I see many people relaxing under the tent outside a café even during the winter. Under the tent is an intermediary area between in- and outside. What we call engawa in Japan. I think the space between the in- and outside is pleasant for all people, regardless of race. When the large aperture of OPAM is opened, it becomes an engawa.

You’re right. And there are many people sitting and relaxing on the staircase.

You can see the outside, and the inside can be seen from the outside. Light pours in and breezes pass. Don’t you think it’s suffocating in a hotel room with a window that doesn’t open? When the season is nice, it's more comfortable with the air conditioning off. That’s why light and wind are important. Spaces where people gather are not boxes. It’s the quality of space that makes the difference.

What is necessary for construction for it to be loved for a long time?

I think a sense of freedom and flexibility. With OPAM, an aperture can be opened when the season is nice and closed when it’s cold. I want to create structures that change by season, like people change their clothing. I think a building should be something that changes.

Lastly, there are many buildings by many architects in Oita. Tell us how we can enjoy a trip to see these buildings.

I think it would be more interesting to understand the meaning behind and creativity in the design. Traveling to see buildings is nothing special. We all travel through Europe to see structures in Europe. It’s the same for travel in Kyoto. There is nothing special about traveling to see buildings and structures, and I think more people should visit architectural sites of their own city or during trips to other cities.

Architect / born 1957 in Tokyo Shigeru Ban studied at the Southern California Institute of Architecture (SCI-ARC, Los Angeles) from 1978 to 1980. He went to Cooper Union School of Architecture in New York from 1980 to 1982. He then worked at Isozaki Arata Atelier from 1982 to 1983, following which he graduated from Cooper Union School of Architecture in 1984. He established Shigeru Ban Architects in 1985. He consulted for the United Nations High Commissioner for Refugees (UNHCR) from 1995 to 1999, and at the same time established the NGO Voluntary Architects’ Network (VAN, currently an NPO). His major works include Centre Pompidou-Metz Museum (Metz, France), Mt. Fuji World Heritage Centre (Shizuoka), and Swatch Omega (Biel/Bienne, Switzerland). He won L’Ordre des Arts et des Lettres, France (Commandeur), the Pritzker Architecture Prize, the Mother Teresa Memorial Award for Social Justice, and a Medal with Purple Ribbon. Currently, Shigeru Ban is a professor at the Faculty of Environment and Information Studies, Keio University.

By Shinkansen and train 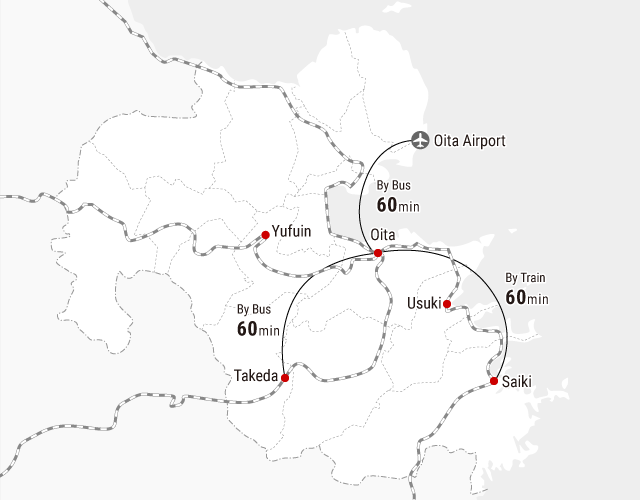 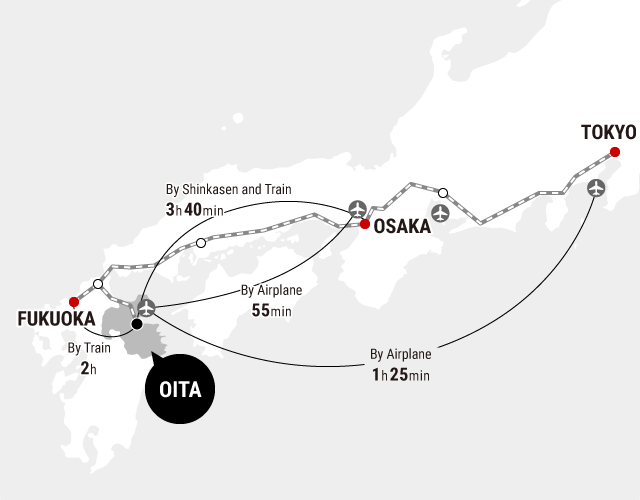